Rabbi David Teutsch, who shares the co-chairmanship with me and Rabbi Andrea London of the J Street Rabbinic and Cantorial Cabinet, has written an authoritative piece that will appear in the Times of Israel detailing how the extreme right-wing is the greatest anti-Semitic threat and NOT the extreme left wing. Though there are concerns about a growing anti-Israel sentiment on the left, these people are not violent. The right wing is.

David shows us why and is to be complemented.

Rabbi Ammiel Hirsch is Senior Rabbi of the Stephen S. Wise Free Synagogue in New York City. He was interviewed in the Jerusalem Post.

This interview given in advance of the Prime Minister’s visit and the AIPAC conference is must reading.

“The Trump Administration denies the ‘occupation’ of the Palestinians in the West Bank making the Trump administration an accomplice in the violation of international law and the death of a two-state solution.”
—Dylan Williams, J Street

Member of Knesset Stav Shaffir (Israel Labor Party), the youngest parliament member in Israel’s history, entered public life after her leading role in the 2011 social justice movement, Israel’s largest-ever, cross-party protest, mobilizing hundreds of thousands of Israelis to take to the streets and set up protest camps throughout the country.

Shaffir is now serving  her second term in the Knesset and is known for her relentless fight against the corrupt use of taxpayer money. She  successfully exposed and blocked, for the first time in Israel, the massive use of government funds for political purposes.

A former journalist, Stav studied for her master’s degree in Philosophy and History of Science and Ideas at Tel Aviv University and holds a BA in Journalism and Sociology from City University of London, where she was the recipient of the Olive Tree Program scholarship for conflict resolution.

This video was likely released to the American Jewish community in advance of Stav’s appearance at the AIPAC Policy Conference, March 24-26 in Washington, D.C. She explains here, and hopefully she will do the same before the AIPAC thousands, why PM Netanyahu does NOT represent the vast majority of Israelis. 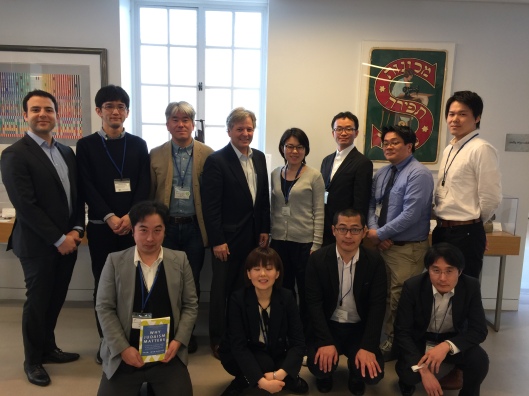 I had the unusual pleasure this week of welcoming into my synagogue ten young Japanese men and women scholars of Judaism, Jewish history, Zionism, anti-Semitism, and Jewish thought. Their biographies are all impressive and frankly, I was stunned by the depth and breadth of their intellectual and academic concerns and interests.

To read my full account, go to my blog at the Times of Israel – link https://blogs.timesofisrael.com/10-young-japanese-scholars-of-judaism-and-jewish-history-visit-los-angeles/

Anyone who supports the right of the Jewish people to a state of our own and calls for a two-states for two people’s resolution of the Israeli-Palestinian conflict is not an anti-Semite.

Ilhan Omar: We must apply our universal values to all nations. Only then will we achieve peace, Washington Post –

Rep. Ilhan Omar writes, “U.S. support for Israel has a long history. The founding of Israel 70 years ago was built on the Jewish people’s connection to their historical homeland, as well as the urgency of establishing a nation in the wake of the horror of the Holocaust and the centuries of anti-Semitic oppression leading up to it. Many of the founders of Israel were themselves refugees who survived indescribable horrors. We must acknowledge that this is also the historical homeland of Palestinians. And without a state, the Palestinian people live in a state of permanent refugeehood and displacement. This, too, is a refugee crisis, and they, too, deserve freedom and dignity. A balanced, inclusive approach to the conflict recognizes the shared desire for security and freedom of both peoples. I support a two-state solution, with internationally recognized borders, which allows for both Israelis and Palestinians to have their own sanctuaries and self-determination. This has been official bipartisan U.S. policy across two decades and has been supported by each of the most recent Israeli and Palestinian leaders, as well as the consensus of the Israeli security establishment. “

For full article go to https://wapo.st/2ub60vk

I have written a poetic midrash based on the word “Vayikra…” And God called Moses. You can read on my Times of Israel Blog at https://blogs.timesofisrael.com/moses-and-gods-tears-a-poetic-midrash-for-vayikra/

Bradley Burston is a long-time columnist with Haaretz. I’ve known Brad since our Berkeley days as students together going back 48 years. He is a thinker and astute writer and his moral and political clarity is second to none.

Brad was interviewed on January 20 on the Haaretz Weekly Podcast, and his observations are important for us all to hear.

He explained that in recent years every policy choice Israel has taken vis a vis the Palestinians is meant to foil future agreements or arrangements between them and make most people believe that nothing can change from the status quo of occupation and settlement expansion in the West Bank.

The podcast host noted the prediction of Israeli historian Benny Morris who believes that within 30 to 50 years, if nothing changes and the trajectory of settlement on the West Bank continues, Israel will be a vastly diminished state, Jews will be a persecuted minority, and those who can afford to leave Israel will move to the United States. He asked for Brad’s reaction.

Brad responded: “Jewish historians are not futurists” and no one can know what will occur going forward. Other countries have suffered conflicts of immense proportions that could have destroyed those countries, but didn’t (e.g. the American Civil War, Germany and Japan after World War II, and Vietnam).

He concluded optimistically: A new generation of Israeli Jews and Palestinian Arabs may come to the conclusion that “our parents were idiots and we have to do something else.” Each side will need to embrace less maximalist positions, agree to share the land in some form of government or confederation, and come up with something more creative than we have now.

Is it already too late? Will a change of heart and perspective occur in the next 30-50 years?

We can’t know. In the meantime, we American Jews ought to support those groups in Israel that are fighting against the occupation.

Americans’ overall views toward Israel and the Palestinian Authority have changed little in the past year, with roughly seven in 10 viewing Israel very or mostly favorably and two in 10 viewing the Palestinian Authority in the same terms.
At the same time, the new poll finds a slight softening of Americans’ partiality toward Israel in the Israeli-Palestinian conflict, particularly among moderate/liberal Republicans and, to a lesser extent, liberal Democrats.
While liberal Democrats are no less favorable toward Israel today than they have been over the past two decades, they have grown more favorable toward the Palestinians and, perhaps as a result, less likely to side with Israel in the conflict. On average from 2017-2019, liberal Democrats have been nearly as likely to be pro-Palestinian as pro-Israeli in their views on the conflict, and that is very different from Republicans, and to a lesser extent moderate/conservative Democrats who remain more solidly in Israel’s corner.
Note: The question was not asked “Do you believe in the right of the State of Israel to exist as a Jewish and democratic state according to its Declaration of Independence even if you disagree with policies of the Israeli government vis a vis the Palestinians.” I suspect that had that question been asked, the numbers in support would be much higher for Israel.
https://news.gallup.com/poll/247376/americans-not-liberal-democrats-mostly-pro-israel.aspx

On Wednesday, Orly Erez-Likovsky, the head of IRAC’s legal department, went before the Israel Central Elections Commission and argued in favor of disqualifying the candidacies of Michael Ben Ari and Itamar Ben Gvir, candidates who view themselves as Rabbi Kahane’s heirs, and who are running in the elections for the 21st Knesset. The shameful decision made by the Commission will not discourage us, and we will be submitting a petition to Israel’s Supreme Court later this week.

Posted by Rabbi Joshua Weinberg, VP of Israel and Reform Zionism of the Union for Reform Judaism