My gratitude to my friend Rick Feldman who posted this article  on the J Street Leader’s List serve. Hirsi Ali is always worth reading – and now especially with regards to Ilhan Omar and the 4 progressive Congresswomen.

Can Ilhan Omar Overcome Her Prejudice?

I was born in Somalia and grew up amid pervasive Muslim anti-Semitism. Hate is hard to unlearn without coming to terms with how you learned it. 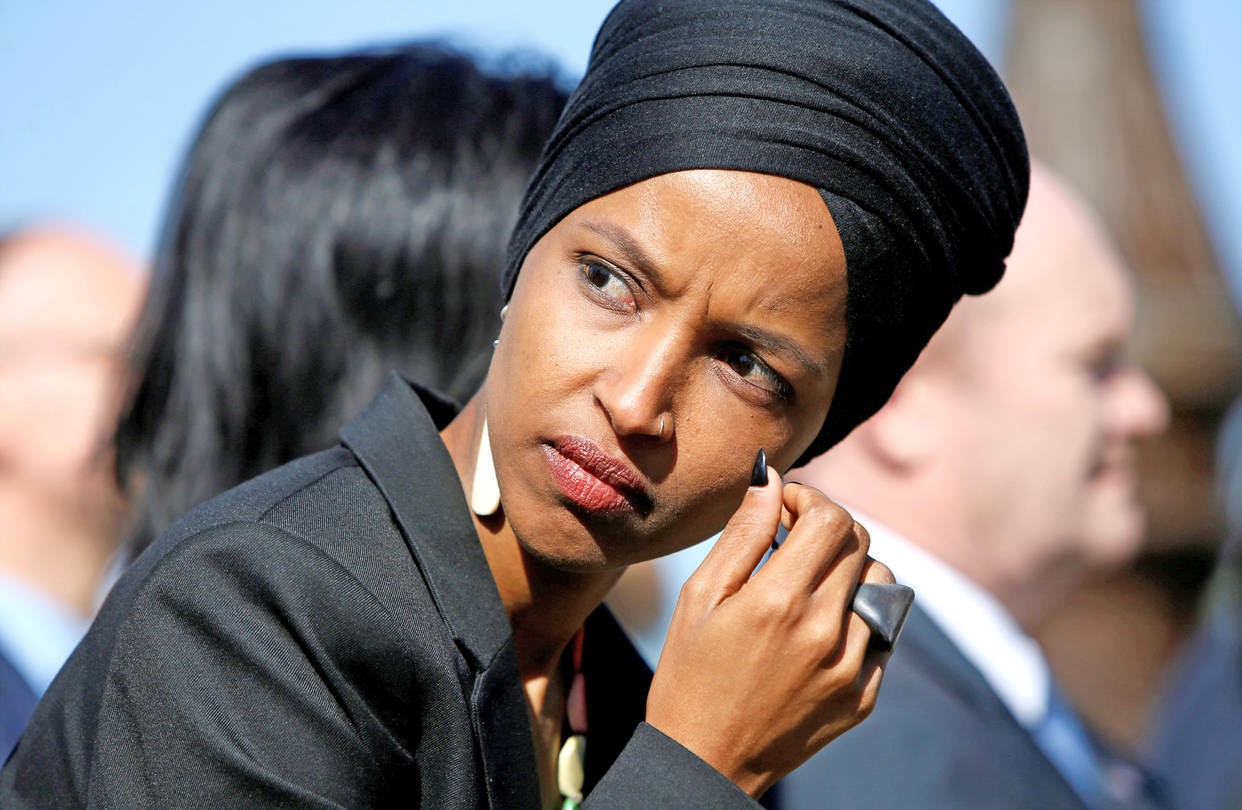 I once opened a speech by confessing to a crowd of Jews that I used to hate them. It was 2006 and I was a young native of Somalia who’d been elected to the Dutch Parliament. The American Jewish Committee was giving me its Moral Courage Award. I felt honored and humbled, but a little dishonest if I didn’t own up to my anti-Semitic past. So I told them how I’d learned to blame the Jews for everything.

Fast-forward to 2019. A freshman congresswoman from Minnesota has been infuriating the Jewish community and discomfiting the Democratic leadership with her expressions of anti-Semitism. Like me, Ilhan Omar was born in Somalia and exposed at an early age to Muslim anti-Semitism.

Some of the members of my 2006 AJC audience have asked me to explain and respond to Ms. Omar’s comments, including her equivocal apologies. Their main question is whether it is possible for Ms. Omar to unlearn her evident hatred of Jews—and if so, how to help.

In my experience it is difficult, perhaps impossible, to unlearn hate without coming to terms with how you learned to hate. Most Americans are familiar with the classic Western flavors of anti-Semitism: the Christian, European, white-supremacist and Communist types. But little attention has been paid to the special case of Muslim anti-Semitism. That is a pity because today it is anti-Semitism’s most zealous, most potent and most underestimated form.

I never heard the term “anti-Semitism” until I moved to the Netherlands in my 20s. But I had firsthand familiarity with its Muslim variety. As a child in Somalia, I was a passive consumer of anti-Semitism. Things would break, conflicts would arise, shortages would occur—and adults would blame it all on the Jews.

When I was a little girl, my mom often lost her temper with my brother, with the grocer or with a neighbor. She would scream or curse under her breath “Yahud!” followed by a description of the hostility, ignominy or despicable behavior of the subject of her wrath. It wasn’t just my mother; grown-ups around me exclaimed “Yahud!” the way Americans use the F-word. I was made to understand that Jews—Yahud—were all bad. No one took any trouble to build a rational framework around the idea—hardly necessary, since there were no Jews around. But it set the necessary foundation for the next phase of my development.

At 15 I became an Islamist by joining the Muslim Brotherhood. I began attending religious and civil-society events, where I received an education in the depth and breadth of Jewish villainy. This was done in two ways.

The first was theological. We were taught that the Jews betrayed our prophet Muhammad. Through Quranic verses (such as 7:166, 2:65 and 5:60), we learned that Allah had eternally condemned them, that they were not human but descendants of pigs and monkeys, that we should aspire to kill them wherever we found them. We were taught to pray: “Dear God, please destroy the Jews, the Zionists, the state of Israel. Amen.”

We were taught that the Jews occupied the Holy Land of Palestine. We were shown pictures of mutilated bodies, dead children, wailing widows and weeping orphans. Standing over them in military uniform were Israeli soldiers with large guns. We were told their killing of Palestinians was wanton, unprovoked and an expression of their hatred for Muslims.

The theological and the political stories were woven together, as in the Hamas charter: “The Prophet, Allah bless him and grant him salvation, has said: ‘The Day of Judgment will not come about until Muslims fight the Jews (killing the Jews), when the Jew will hide behind stones and trees. The Stones and trees will say, “O Muslims, O Abdulla, there is a Jew behind me, come and kill me.” ’ . . . There is no solution for the Palestine question except through Jihad.”

That combination of narratives is the essence of Muslim anti-Semitism. Mohammed Morsi, the longtime Muslim Brotherhood leader who died June 17 but was president of Egypt for a year beginning in 2012, urged in 2010: “We must never forget, brothers, to nurse our children and our grandchildren on hatred for them: for Zionists, for Jews”—two categories that tend to merge along with allegations of world domination.

European anti-Semitism is also a mixture. Medieval Christian antipathy toward “Christ killers” blended with radical critiques of capitalism in the 19th century and racial pseudoscience in the 20th. But before the Depression, anti-Semitic parties were not mass parties. Nor have they been since World War II. Muslim anti-Semitism has a broader base, and its propagators have had the time and resources to spread it widely.

To see how, begin at the top. Most men (and the odd woman) in power in Muslim-majority countries are autocrats. Even where there are elections, corrupt rulers play an intricate game to stay in power. Their signature move is the promise to “free” the Holy Land—that is, to eliminate the Jewish state. The rulers of Iran are explicit about this goal. Other Muslim leaders may pay lip service to the peace process and the two-state solution, but government anti-Semitism is frequently on display at the United Nations, where Israel is repeatedly compared to apartheid South Africa, accused of genocide and demonized as racist.

Media also play their part. There is very little freedom of expression in Muslim-majority countries, and state-owned media churn out anti-Semitic and anti-Israel propaganda daily—as do even media groups that style themselves as critical of Muslim autocracies, such as Al Jazeera and Al-Manar.

Then there are the mosques, madrassas and other religious institutions. Schools in general, especially college campuses, have been an Islamist stronghold for generations in Muslim-majority countries. That matters because graduates go on to leadership positions in the professions, media, government and other institutions.

Refugee camps are another zone of indoctrination. They are full of vulnerable people, and Islamists prey on them. They come offering food, tents and first aid, followed by education. They establish madrassas in the camps, then indoctrinate the kids with a message that consists in large part of hatred for Jews and rejection of Israel.

Perhaps—I do not know—this is what happened to Ms. Omar in the four years she spent in a refugee camp in Kenya as a child. Or perhaps she became acquainted with Islamist anti-Semitism in Minnesota, where her family settled when she was 12. In any case, her preoccupation with the Jews and Israel would otherwise be hard to explain.

Spreading anti-Semitism through all these channels is no trivial matter—and this brings us to the question of resources. “It’s all about the Benjamins baby,” Ms. Omar tweeted in February, implying that American politicians support Israel only because of Jewish financial contributions. The irony is that the resources available to propagate Islamist ideologies, with their attendant anti-Semitism, vastly exceed what pro-Israel groups spend in the U.S. Since the early 1970s the Kingdom of Saudi Arabia has spent vast sums to spread Wahhabi Islam abroad. Much of this funding is opaque, but estimates of the cumulative sum run as high as $100 billion.

Thousands of schools in Pakistan, funded with Saudi money, “teach a version of Islam that leads [to] anti-Western militancy,” according to Connecticut Sen. Chris Murphy—and, one might add, to an anti-Semitic militancy.

In recent years the Saudi leadership has tried to turn away from supporting this type of religious radicalism. But increasingly Qatar seems to be taking over the Saudi role. In the U.S. alone, the Qatar Foundation has given $30.6 million over the past eight years to public schools, ostensibly for teaching Arabic and promoting cultural exchange.

For years, Qatar has hosted influential radical clerics such as Yusuf al-Qaradawi and provided them with a global microphone, and the country’s school textbooks have been criticized for anti-Semitism. They present Jews as treacherous and crafty but also weak, wretched and cowardly; Islam is described as inherently superior. “The Grade 11 text discusses at length the issue of how non-Muslims should be treated,” the Middle East Media Research Institute reports. “It warns students not to form relationships with unbelievers, and emphasizes the principle of loyalty to Muslims and disavowal of unbelievers.”

The allegation that Jewish or Zionist money controls Congress is nonsensical. The Center for Responsive Politics estimates that the Israeli government has spent $34 million on lobbying in Washington since 2017. The Saudis and Qataris spent a combined $51 million during the same period. If we include foreign nongovernmental organizations, the pro-Israel lobbying figure rises to $63 million—less than the $68 million spent lobbying for Saudi Arabia and the United Arab Emirates.

In 2018 domestic American pro-Israeli lobbying—including but not limited to the American Israel Public Affairs Committee, or Aipac—totaled $5.1 million. No comparable figures are available for domestic pro-Islamist lobbying efforts. But as journalist Armin Rosen observes, Aipac’s 2018 total, at $3.5 million, was less than either the American Association of Airport Executives or the Association of American Railroads spent on lobbying. Aipac’s influence has more to do with the power of its arguments than the size of its wallet.

Now consider the demographics. Jews were a minority in Europe in the 1930s, but a substantial one, especially in Central and Eastern Europe. Today Jews are at a much greater disadvantage. For each Jew world-wide, there are 100 Muslims. In many European countries—including France, Germany, the Netherlands and the U.K.—the Muslim population far exceeds the Jewish population, and the gap is widening. American Jews still outnumber Muslims but won’t by 2050.

The problem of Muslim anti-Semitism is much bigger than Ilhan Omar. Condemning her, expelling her from the House Foreign Affairs Committee, or defeating her in 2020 won’t make the problem go away.

Islamists have understood well how to couple Muslim anti-Semitism with the American left’s vague notion of “social justice.” They have succeeded in couching their agenda in the progressive framework of the oppressed versus the oppressor. Identity politics and victimhood culture also provide Islamists with the vocabulary to deflect their critics with accusations of “Islamophobia,” “white privilege” and “insensitivity.” A perfect illustration was the way Ms. Omar and her allies were able to turn a House resolution condemning her anti-Semitism into a garbled “intersectional” rant in which Muslims emerged as the most vulnerable minority in the league table of victimhood.

As for me, I eventually unlearned my hatred of Jews, Zionists and Israel. As an asylum seeker turned student turned politician in Holland, I was exposed to a complex set of circumstances that led me to question my own prejudices. Perhaps I didn’t stay in the Islamist fold long enough for the indoctrination to stick. Perhaps my falling out with my parents and extended family after I left home led me to a wider reappraisal of my youthful beliefs. Perhaps it was my loss of religious faith.

In any event, I am living proof that one can be born a Somali, raised as an anti-Semite, indoctrinated as an anti-Zionist—and still overcome all this to appreciate the unique culture of Judaism and the extraordinary achievement of the state of Israel. If I can make that leap, so perhaps can Ms. Omar. Yet that is not really the issue at stake. For she and I are only two individuals. The real question is what, if anything, can be done to check the advance of the mass movement that is Muslim anti-Semitism. Absent a world-wide Muslim reformation, followed by an Islamic enlightenment, I am not sure I know.

Correction
An earlier version misstated the sum spent on lobbying for Saudi Arabia and the United Arab Emirates.